Jesus’ famous story has been traditionally called “The Prodigal Son”, but it would be better named “The Forgiving Father.”

“...But while he was still a long way off, his father saw him and was filled with compassion for him; he ran to his son, threw his arms around him and kissed him.” Luke 15:20

In Luke 15:11-32, Jesus tells a story about a loving, forgiving father who is an image of our Heavenly Father. God sees us when we stray away from Him. He even knows our greatest failures, yet He loves us and waits for us to come home to Him.

The Father is More Fair than We Think

Both sons in the story believed a lie about their father. The younger son believed the father was holding him back and keeping him from a fun and exciting life. (Luke 15:12-13). Do you reject God because you think you’ll have to give up fun?

The older son believed his father was a judge. (Luke 15:29) He thought he had to earn his father’s love and was unable to enjoy the love he already had. Are you working hard to be good enough for God to love you?

Jesus describes the compassion and love the father has for his son in Luke 15:20. He didn’t wait for his son with a judgmental glare or refuse to receive his son because he made mistakes. The son offered to return as a lowly servant but the father did not allow it. “He ran to his son, threw his arms around him and kissed him.” (Luke 15:22-24) He restored his son completely and celebrated his return. Nothing the son did was too big for the father to forgive.

This is what God does for you when you sin or stray away. God waits for you to come home and forgives you completely. Do we deserve this? No. He forgives us because of His love and compassion. Nothing is too big for God to forgive. “If we confess our sins, he is faithful and just and will forgive us our sins and purify us from all unrighteousness.” (1 John 1:9)

The Father Desires a Relationship

When the prodigal son returns home, the loving father goes out to meet him and says: “This son of mine... is found!" (Luke 15:24). Do you ever forget that you are God’s child? Do you try to earn God’s love but end up feeling like a failure? “See what great love the Father has lavished on us, that we should be called children of God!...” (1 John 3:1) God loves you already and wants to be your Father. Click here to learn how to become a child of God today.

Father, I have sinned against you and I do not deserve to be called your child. Thank you that your mercy and grace are so great that you forgive ALL my sins through Jesus Christ. Thank you for pouring out your unfailing love on me and making me your beloved child. Help me to walk in your presence and be filled with your Holy Spirit so I may have all the fullness of God.

Are you a child of God? Do you experience the unfailing love and complete forgiveness of the Father in your life?

How do I get back up after I fall? 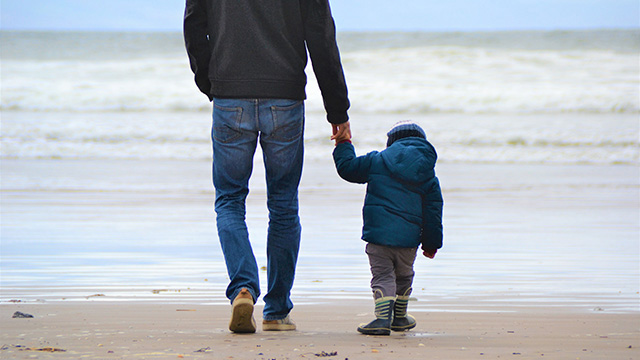 A Husband and Father Your Family Trusts

What are the characteristics of a Godly father?